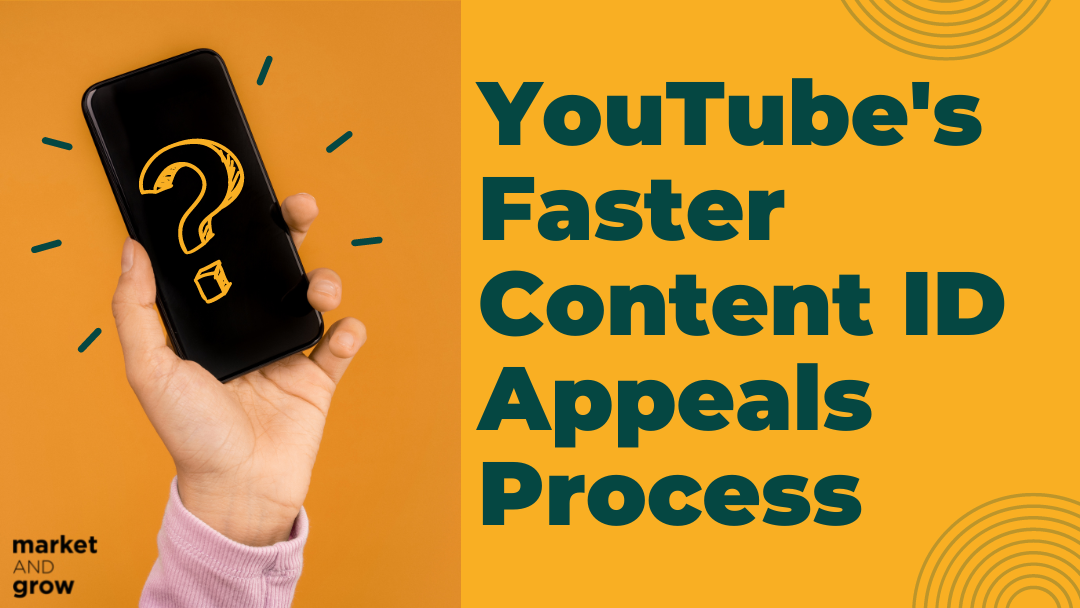 On July 18th, Creator Insider announced on their YouTube channel that YouTube is implementing a new, faster way to appeal your Content ID strikes (copyright strikes). This faster appeals process skips over the “dispute” part of a copyright strike, and offers a new option for creators to “Escalate to appeal.” This option is only available to blocked content. Keep reading to understand the details of this new change.

In the video, Kevin, a product manager working on copyright, goes into detail about what the content ID dispute and appeal process looks like, how it’s changing, and some additional advice. In this blog, we are going to break down everything and let you know what it all means.

YouTube recently also shared their tips on the Community Guidelines appeal process, read our blog on it here: YouTube Appeals Process for Violating Community Guidelines. One important fact we mentioned in that blog that also applies here is that YouTube has a “three strike” system which means if you have three copyright strikes at the same time, your channel is subject to being completely shut down. It’s important to note that a content ID claim is not the same thing as a copyright strike, since a copyright strike can only happen after the dispute and appeal process escalates to the law being involved.

How does the content ID dispute process work right now?

When you upload a video with copyrighted (or not copyrighted!) content, your video might get a content ID claim. If you believe you have all the rights to fairly use that content, you can dispute the claim. Be aware that there are a lot of trolls and huge corporations that do not care out there that will issue a content ID claim even if their content is not even mentioned in your video.  Be aware that there is no penalty for issuing a fraudulent content ID claim currently, so some people are exploiting the system even when the video has nothing to do with their copyrighted content. So, it’s important to stay on top of those claims in order to keep the revenue that’s on your business’s YouTube channel.

When you choose to dispute, it then goes back to the claimant (the person who made the claim) to review, and they have 30 days to decide whether to release or reinstate their content ID claim. If they don’t decide within 30 days, the claim is automatically released.

According to Kevin, in the second half of 2021, this appeal process resulted in over 60% of disputes resolving in favor of the creator who filed the dispute. The dispute process can be really helpful to creators like you when it’s used in the right way.

If the claimant still believes their claim is still valid after you disputed it, they can reject your dispute and reinstate their claim. At that point, you have the option to file an appeal. When you appeal, that again goes to the claimant to review who now only has the choice between releasing their claim or sending a copyright takedown request, which is a legal process. If they send a takedown request, YouTube would then review it to make sure it’s valid, which means it contains all the information required by the law. This is when the “three strikes” rule comes into play because if the takedown request is valid, then the video comes down and your channel will get a copyright strike.

The appeal is an important step. It ensures a thorough review by the claimant because unless they decide to release their claim, they have to send a takedown request and enter the formal legal process. This is when trolls usually get stricken down since they have no legal backing as to why they are targeting your channel. However, that doesn’t mean it hasn’t already caused you a lot of stress.

Up until now, claimants have had 30 days to make the decision on an appeal. Otherwise, the claim gets automatically released at the end of the 30 days – just like with a dispute. Since this process can take quite a long time to play out if you have to go through both the dispute step and the appeal step, YouTube has decided to make a change.

The two changes to the content ID appeals process

The first change is that YouTube is shortening the amount of time that claimants have to review content ID appeals from 30 days to 7 days.

Note that claimants will still have 30 days to review the initial dispute. It’s only the appeal that’s going to be shortened to seven days, as shown in the graphic above.

The second change is for claims blocking your video from being seen, or block claims. You will now have the option to skip the initial dispute step and go straight to the appeal stage (which is shortened to 7-days). This is because block claims stop your content from being shown at all, meaning they’re pretty serious to revenue or view/traction loss. This new option is known as the “escalate to appeal” option, as mentioned in the title of this section.

For block claims you’re certain are invalid, the escalate to appeal option can help you get the claim resolved faster and this means your video can be available again as quickly as possible.

Should I actually use the escalate to appeal option?

If you do ever happen to have a block claim on one of your videos, it’s important to know the risk of escalating to appeal. While this may sound great for cutting time, it should really only be used in a dire or certain situation, since skipping that initial dispute step means that you are a lot closer to getting the law involved, and risking a strike on your channel.

The intention behind this change is if you’re looking for a quicker resolution to a block claim. Like we said, going in you must understand you could get a copyright strike if the claimant issues a valid takedown request. Remember, escalate to appeal is just an option and you can always choose to go through the regular dispute process if you can afford to potentially wait the full 30 days.

You also don’t have to dispute or appeal a content ID claim at all. Content ID claims don’t result in penalties on your channel – only when it escalates to a copyright strike – so you can always do nothing and accept the claim. This will mean that any ads running on your video will not result in revenue for your channel. If you’re not on the creator fund or see YouTube as an avenue for revenue for your business, this might be a good option if you just want to, say, use a section of a popular pop song to make your video more fun and engaging. Alternatively, you can also use the YouTube video editing tools to remove or replace the copyrighted content from the content ID claimed video.

We should also mention that your channel has to be eligible for content ID appeals in order to file one. You can check whether your channel is eligible on your “channel features” page. If it’s not, you might need to complete a one-time verification before you can file an appeal.

At the end of the day, if you’re not sure what to do, you might want to get advice from a lawyer.

Some last advice and notifications

Firstly, escalate to appeal should probably not be your default. Even if you get a copyright claim that you’re sure is invalid, the dispute process is still a better and safer way to let the claimant know there may have been a mistake.

Second, while the appeal and counter notification steps are powerful tools, they can have potential consequences for you, the creator. Kevin recommends referring back to the help center to fully understand the process, and use them when appropriate.

The changes have already started being implemented to a subset of creators, and they plan to continue to roll out the changes over time. This way the new changes can have a trial period to see if any changes need to be made before everyone has access to the new appeals process.

We keep you updated on all things marketing or things happening in the digital world that could impact your business in our Monday weekly newsletter. Be sure to scroll down to the green box to sign up.

Subscribe to our Weekly Newsletter to get the latest updates and news from the Market & Grow team.